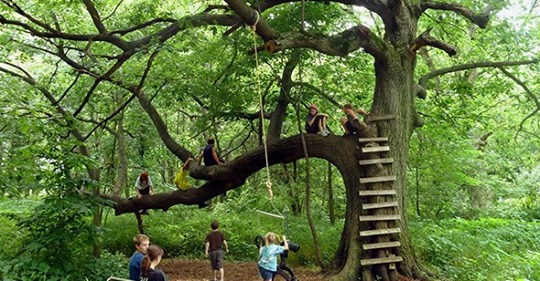 Prisoners all over the world are defined by the fact that they can’t move freely. The inmates at Max Security prisons in the USA get 2 hours of outdoor time daily. It comes as a shock then when we found out that one group spends less time outdoors than prisoners, our children.

12 parents were given a survey that found out that one-third of kids aged 5 to 12 spend on average less than 30 minutes outside every day. Unilever brands OMO and Persil sponsored they survey and they made a new marketing campaign “Dirt is good- Free the Children”.

Below is a short film that showcases prisoners responses to the survey:

The inmates at a maximum security facility in said their best time of day is when they can go outside. “You take all your problems and frustrations and just leave them out there,” one prisoner said. Another said “it keeps his mind right.”

Most prisoners said that it’s “sad” that kids spend less than 30 minutes outdoors daily. A prisoner said if he would have one wish granted is to take his own child to a park.

Another study found out that 1 in every 9 children “have not set foot in a park, forest, beach or any other natural environment for at least 12 months.”

Recently, The Huff Post reported that children spending so little time outside (less than half their parents did) is making this generation of children “unsociable, unimaginative and inactive”. Over a third of children have never played in the mud and only half of them have built a sandcastle and had a picnic in their own yard. Also more than half of kids prefer screen time over playing with other kids.

To make matters worse all these time inside is making our children who are mentally and physically ill:

“We are physically active when we spend time outdoors, so we are less likely to become obese. When sunshine hits our skin, we form Vitamin D, which helps with a number of health issues. Peer-reviewed scientific studies have shown that time spent outside lowers rates of heart disease, osteoporosis, multiple sclerosis, and some forms of cancer. Kids with ADHD focus better when they spend time outdoors. And, nature time leads to more positive moods, as well as lower stress and anxiety.”