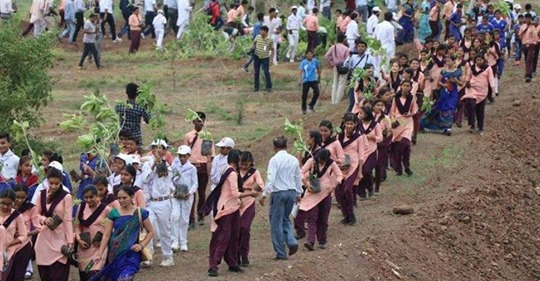 A new world Guinness world record was set in the Indian state of Madhya Pradesh after more than 1.5 million volunteers planted 66 million tree saplings in a time period of 12 hours.

This planting beat the previous record which was set in the state of Uttar Pradesh when 800,000 people planted 50 million trees back in 2016

Shivraj Singh Chouhan, the chief minister of Madhya Pradesh, boasted about the great achievement saying: “I am extremely proud to happily share that people of Madhya Pradesh successfully planted 6.63 Crore saplings today.” One crore is 10 million.

The press reported that the aim of the event was to raise awareness for the “make India green again” plan. Indians said at the climate conference in Paris that they are dedicated to increasing the area of forest to over 95 million hectares. Their plan is to do this by the year 2030 and they will spend upwards of 6.2$ billion for this reforesting.

“I am greatly indebted to all who are planting trees today,” Chouhan added. “We will be contributing significantly to saving nature. By participating in a plantation, people are contributing their bit to climate change initiatives and saving the environment.”